To be honest, I could have sworn that I’d posted since announcing my acceptance into Grad School. Seems I haven’t so let’s do a little recap of the past year or so.

Yes, I am still pursing my MFA. Seton Hill has been good to me. I was paired up with a New York Times best selling author who acted as a mentor for my first two semesters. Maria V Synder was and is great. Now that I’ve entered my third semester, I got a new mentor (this is according to plan and everyone does it) – Scott Johnson, a horror author out of Texas. He’s a lot of fun and I’m looking forward to seeing what I can learn from him. My thesis novel is about halfway complete and coming together nicely. 60,000+ words.

Class wise, I’ve taken two Reading in Genres (RiGs). Classic Fantasy was fine – a lot of stuff I’ve read before and long novels, which made for some tough weeks. I followed that up with Noir Mystery which I loved. Made me want to write a mystery sometime in the future. This semester is Thrillers. Too early to tell on that one. Each of the residencies have been enjoyable as well and I do look forward to traveling to Seton Hill and seeing my classmates.

Outside of school – work continues. Not much else to say there. No marathons in the planning for now as I decided to put that on hold until grad school was complete. Cats are all fine as is Steph.

So there is the recap of the past year or so. Hopefully I won’t be so absent in the future. Hahah…yeah, right.

A big change for a guy who graduated college 20 years ago but hey, why not? Getting a MFA will allow me to actually do something with that English major I picked up plus Seton Hill’s program has a lot of benefits.

First – It’s a low residency program. I only have to be on campus twice a year, each time for a week. Once in June and once in January. Everything else is done online, Skype, or via email. Which is pretty handy when you’re a person with a full time job.

Second – This MFA is about writing popular fiction. That’s science fiction, fantasy, horror, young adult, mysteries, or romance. Most MFAs are about classical literature or other subjects that to be honest, work for other people but not me. This one though? Tailored specifically for me.

The whole program should last about 2.5 years and by the end, not only will I have a masters but I’ll also have a completed book written (that’s actually a degree requirement).

So that’s what is happening. More info when I get it but right now, pretty excited and happy. 🙂

Yes, something good is coming. Details by the end of the week (hopefully). 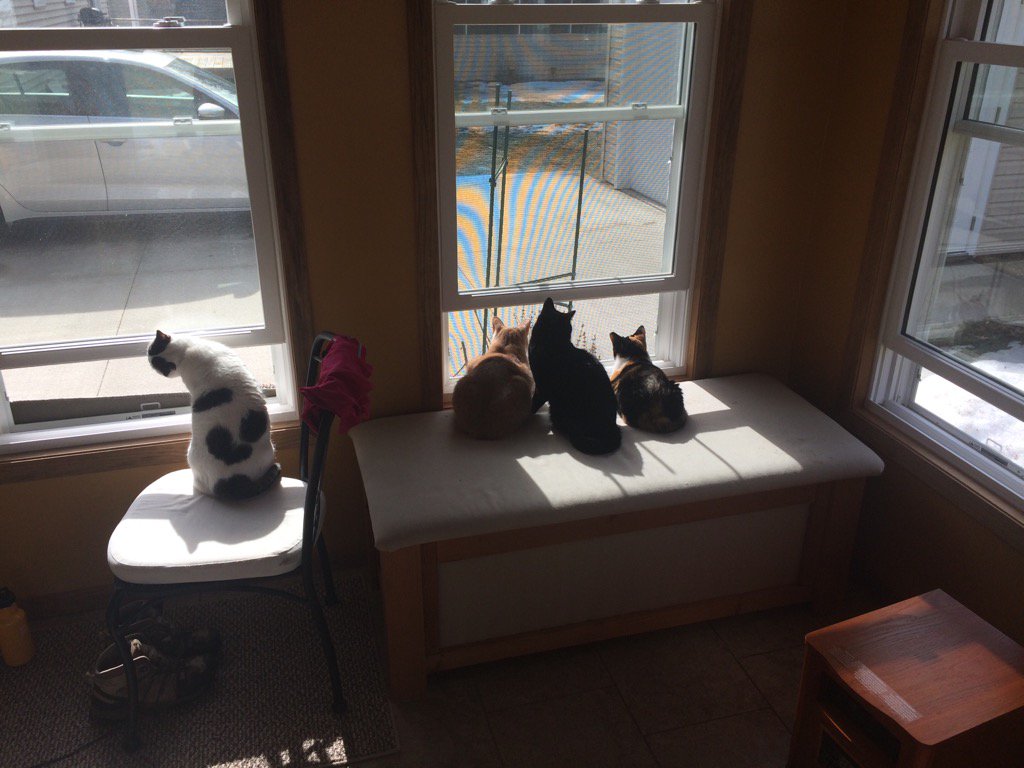 It was an abnormally warm February day. The cats approved.

A lot later than I would have liked but Imgur was being a jerk. Finally I gave up and just linked things off of Dropbox.

The summary of our trip : We headed down South Kaibab Trail (~7 miles) to the Bright Angel Campground at the bottom. We spent two nights down there and used our ‘off’ day to hike north to Ribbon Falls (~12 mile round trip). Then we packed up early in the morning and headed out via the Bright Angel Trail (~9+ miles). A lot of hiking but a lot of very cool scenery.

I’ve put a few pictures below but here’s a complete gallery (180+ pictures) of the trip – Grand Canyon trip.

This was supposed to be a nice long post about our recent vacation to the Grand Canyon, complete with pictures and other neat stuff. Unfortunately, a major problem with our ISP has resulted in the speeds at home being so slow that it’s near impossible to upload the pictures. Thus, I got nothing. But once that gets fixed (today? tomorrow?), I’ll get them uploaded and follow with a full recap.

Here’s the short version – walked down a lot of steps, camped under a beautiful sky, went WTF America?, ate good camp food, and then hiked back up a whole lotta steps. Had a great time.

When asked ‘How is the writing going?’, this has been the best response I’ve had so far:

Our local humane society had an outbreak of ringworm, necessitating the need for a number of cats to be sent to shelter homes for recovery or to avoid catching the stuff in the first place. Indy first went to our in-laws place. It didn’t take long for us to figure out that a young kitten with high energy wasn’t ideal for a couple of retired folks, so we brought him to our place. Our intention was to keep him out on our porch separated from our cats until the all clear was given to take him back.

But, as cats are cats, introductions became necessary. Bee (our one eyed cat) was the first and she got along with him pretty well. Then we introduced Skye who also got along fine and finally Cici (the blind one). And surprisingly? Indy got along with Cici and not only played with her but also played at her pace. We haven’t seen another cat do that yet. So after that, well, it was really only a matter of time.

After a couple of weeks, Indy was running around the house and hanging out with the girls. So he’s here to stay (I think Friday is the ‘official’ adoption date). And the name? Well, he was originally called Tawny which I hated so we immediately began searching for another before settling on Indy. The name comes from his intense curiosity, his desire to always be on the go, and his habit of digging in the litter as though he were searching for the Ark of the Lost Covenant. It suites him.

As I approach the answer to Life, the Universe, and Everything (more on that later this week), I figured I’d share a new hobby.

Sometime last year I came across an article about Vintage Base Ball. In short, it’s playing baseball using the rules of the 1860s, dressed in the fashion of the day, and all the attitude around it (including spelling base ball as two words, not one). It looked like a lot of fun, athletic but laid back and an emphasis on sportsmanship. A little hunting around and I found a couple of teams about an hour away. Plus it was the off season anyway so I put that on the shelf.

Fast forward to this spring and an article popped up in one of the local news sites – someone looking to form a vintage base ball team here in town. I signed up, along with a bunch of others, and we formed ourselves a team – the Decorah Driftless Dodgers. The rules of 1860s are a bit different from the modern era. To list a few – the ball can be caught off one bounce for an out, the pitcher doesn’t try to throw strikes (and in fact, strikes only count if you swing), there is no leading off of bases, there are technically no home runs so if a ball goes over a fence, you can retrieve it and throw home for the out, and a few other things. It’s interesting and a nice history lesson.

This past weekend, we played our first official game as a team. We beat the Highland Prairie Hayseeds, 10-9, and I personally went 2 for 4 with a couple of RBIs and good plays in the outfield. I later joined the Hayseeds in their second game against the Lanesoro Excelsiors as they were down a man and I was having fun.

So a good start I have to say. I’m not sure how many more games this year the Driftless Dodgers will play. Hopefully a few but it’s early so we’ll see what happens.

So as it my annual tradition, I spent this past weekend sick. Because it wouldn’t be Spring and beautiful weather if I were not laying on my couch, miserable and hoping Steph wasn’t about to smother me with a pillow. Or maybe I was hoping she would. My thinking isn’t entirely clear on that.

In either case, what started as a simple sore throat blew up into congestion and aching body followed by ‘Hey, I think I’m getting better!’ and then being unable to keep any food in my body and another day of misery on the couch. I wish I could say that I did a lot of reading but that didn’t happen. Instead, I watched a bunch of YouTube videos, slept (or tried to sleep), and worked on some stuff for the D&D campaign I’m planning.

Oh right – I’m getting back into D&D.

D&D was an obsession of my youth – maybe a little too much so but I have very fond memories of it. From the Basic rules all the way up to 3.5 edition, I played a lot with my friends. After college, I drifted away from it due to the way things go when your friends scatter to the winds. There were a few occasions of online but the tools at the time were clunky and just didn’t work out that great.

Fast forward to the modern era and the tools exist that make playing online a lot nicer. So I started playing a 5th edition campaign and have been having fun enough to start work on my own. No idea how it will end but hey, I’m having fun so there’s that.

Now if you’ll excuse me, I have to get back to seeing if I can make my Saving Throw vs Sickness. C’mon natural 20 …

Moose and Ink
Blog at WordPress.com.